When I opened my mailbox yesterday, I found Weston Noble staring benignly up at me from the cover of Choral Journal magazine. Weston died last December at the ripe old age of 94, and has been celebrated in numerous and far-flung concerts and services in the past year, and now that the American Choral Directors Association has weighed in, I'll add my two cents.

As many of you know, Weston--a lightly-experienced 25-yr-old recent grad--was asked to conduct the Luther College Concert Band and Nordic Choir in 1948 for a one-year interim while a national search was conducted. He would jokingly refer to it as the longest year of his life, since he stayed on with his beloved Nordic Choir for 57 years (not to mention 35 years with the band)!

He was a unique and universally loved man. Everybody has a recollection or two, it seems--he touched so many. René Clausen talks about being a middle-school boy mostly interested in sports until he was dragged to a concert Weston conducted. René says he came away wanting to be just like Weston, and still does. Don't we all.

I was not lucky enough to have many interactions with Weston, but I cherish a few. Once as a lightly-experienced clinician, I was asked to do the Big 9 Festival honor choir. Since I knew over a year in advance, and since Weston was the clinician before me, I asked if I might just shadow him around for the day. It was eye-opening. Although Weston, in his career, conducted over 900 All-State Choir concerts and countless other festivals and clinics, he seemed wholly committed and energized to this moment. He connected with each group of singers, instantly commanding a focus and energy that was electric. Then he graciously chatted with me as if I were a musical peer, which I most certainly was not. He was warm, encouraging, a weird combination of gentleness and intensity--twinkle in the eye, soft voice, ever-present smile together with an obvious passion for the text, the music, and the people bringing it to life.

Occasionally, we had Weston up to Rochester as a guest conductor for CAE or clinician for our Choral Conductors Network, and once the Honors Concert Choir went to Luther to participate in their Dorian Choral Day. Weston was always the same--humble, kind, playful, coaxing sounds from the choirs that would take your breath away.

In 1994, Weston was aptly awarded the first Weston H. Noble Award for Lifetime Achievement in the choral art. I was a highly entertained audience member as Weston was introduced and extolled and also roasted just a bit by Robert Shaw. Noting that Weston had a little (big) obsession about neatness, Shaw tore a piece of paper into tiny pieces and intermittently dropped a few as he spoke, knowing that Weston would be sure to clean them up, which he did, eventually popping up and down like a bird after birdseed. He loved the joke as much as anyone.

Weston created and kept such a bond with all his singers, and really ANYONE on campus. A distant relative of mine fondly remembers running into Weston on the Luther campus and being astonished that Weston knew of and asked about the student's upcoming trombone recital. Until Weston retired, I had many, if not most, of my Honor Concert Choir senior singers sooner or later reporting that they had gotten a call that week from Weston Noble, encouraging them to consider attending Luther. Having taught both Bill and Amy Nelson, who now conduct Honors Treble and Children's Choirs, respectively, Weston would frequently attend our performances (always a thrill and a bit of a sphincter-tightener!) and beam contentedly. Given the thousands of singers he had conducted, I realized he was showering this support throughout the region, and virtually nonstop.

I last saw Weston at an ACDA convention in Sioux Falls in early 2016. He had suffered a stroke, was wheelchair-bound, didn't really recognize me. Nevertheless, he blissfully followed the performances on stage, and a steady stream of well-wishers and admirers came over to him at every break. Even in a diminished state, Weston's presence was cherished by all. We all--choral directors in particular and human beings in general--wanted to be, then and now, just like Weston. 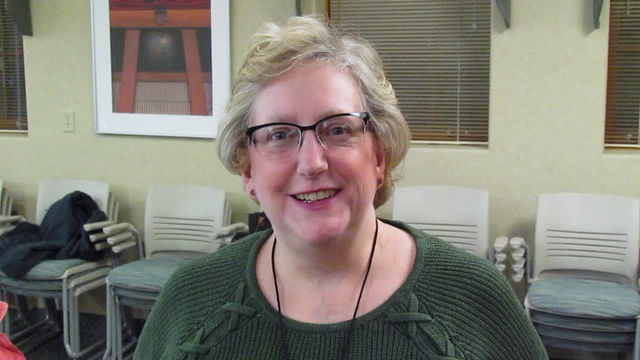 What We're Thankful For - Beth Nienow